The guys tour Australia, I give myself Australian homework, we all win. Hopefully.

First up: The documentary Cane Toads: An Unnatural History. Yes, we actually own this. By we, I mean Larry. I’ve never viewed it the entire way through before tonight, because it involves omnivorous giant toads–I could go my whole life without seeing a giant toad trying to eat a kookaburra–and North Queensland residents trying to take back their region and some of their sanity by running over the toads. Cane toads pop when you hit them with your car, did you know that? Both the action and the sound. Now you know.

Okay, the short version is this. In the 1930’s, the sugar farmers were hit hard by cane grubs. The grubs would eat the sugar cane at its roots, killing one of Australia’s largest exports. Representatives from the Sugar Experiment Station in North Queensland (yep, it’s a thing) went to the yearly world sugar conference (also a thing) in Puerto Rico, in 1932, where Raquel Dexter stood up and said that cane toads had solved the grub problem for Hawaii’s sugar plantations.

Either this was a huge honest mistake, or one of the largest practical jokes in history.

In 1935, 102 Cane toads arrived in North Queensland from Hawaii.

And the solution became the problem.

The life cycles of the grub and toad didn’t sync up, so the toads didn’t solve the original problem. Oh, and heard the phrase “mate like bunnies”? Nope. Cane toads reproduce like it’s an Olympic event. They hump anything. People’s shoes, people’s pets, dead cane toads, smushed flat in the road. If you just read that last phrase and thought, yeah, I can remember wanting ass that badly a couple of times, stop reading and go talk to someone. Dead and flat, and he kept trying for eight hours. That’s a sexual disorder, my friends.

Froggy style is called amplexus. There, I brought a little dignity back into the fuckfest. ‘Cause that is what it is. The male grabs on, and the female goes about her daily errands, because if she didn’t, nothing would get done, because these toads are more demanding of ass than R. Kelly trapped in a closet, they do not care how foolish they look they need froggystyle now.

Second moment that grabbed me, after all the Trapped in a Closet shenanigans:

Toxins. If you interrupt the cane toads while they are fucking, eating your dog’s kibble, or trying to eat a kookaburra minding its own business, and give it a little friendly squeeze, it exudes toxins, that are generally fatal.

To most people, that says don’t touch.

To drug addicts, that says, wonder what would happen if I boiled those toads down to an essence and took a couple of bumps.

Bufotoxins apparently induce incredible color hallucinations. Or kill you. Or both.

Okay, here’s the last part that stuck with me, and it screams serial killer.

When Prince Charles and Lady Diana got married, ideas were tossed about for gifts that signified the spirit of the different regions of Australia. One little reedy voice popped up from the back of one science lab and volunteered. Since no one else really wanted to go to the trouble, all dispersed for coffee, doughnuts, and pretending to work once more.

And Reedy Voice went Lotion in the Basket.

He delicately handcrafted a book about the history of Northern Queensland for the Prince and his bride, binding it himself, and shipping it. He received an extremely gracious but stiffly worded thank-you from the Royal Palace: “We appreciate the effort this must have taken you…”

He made them a book sewn from the skins of six cane toads.

He went directly from gift? to SKINS. That’s straight up serial killer. That man has suspicious lampshades in his house, and missing neighbors. To quote Gareth, WHAT THE ACTUAL FUCK? Where was Scotland Yard? Where was Interpol? Where was fucking Nancy Drew?

I can just see the lovely Princess holding the book up gingerly in one gloved hand. “But, dear, it is very kind, but, why is it bumpy?”

Okay, so the cane toads are profane and disturbing, what with the froggystyle and the popping. Good news! There’s is a children’s book, with no amplexus and no vehicular toadslaughter: Cane Toad: The Worlds Biggest Toad

And now, back to the oogie. These things invade just like in a horror movie, so I crowdsourced my friends, who are almost as strange as I am, for animal invasion horror movies. They did me a solid. Behold!

And one more takeaway from the documentary: If your little girl wants to play dress-up with a cane toad, hug him and squeeze him and push him in a dolly carriage, you say NO. 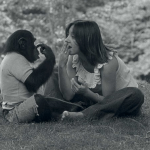