Under the tag don’t let Carla babysit…I guess? For two reasons: I am full of weird stories, and I may be a magnet for weird events.

I documented all of this in 2011 on Tumblr, along with the content of my original Dollop post, My own ghost story, about me, Revere, Massachusetts, and a little old lady voice that may or may not account for my prematurely graying hair.

Here’s some more. These take place in the home of my high school and college years. I broke this into four parts on Tumblr; I will break it in half just gimme sumthin to break for The Dollop.

And, yes, Momma and Papa Dollop will and do verify what I’ve written and what they experienced. Say hi, y’all, they are on Facebook. Use the tiniest bit of Nancy Drew, and you’ll see them. Be nice.

Okay, make sure your arms are inside the ride and the safety bar in the locked position…

Time for a campfire story (to gleefully mix my metaphors on purpose):

My parents’ home—the house we moved into when I was in 9th grade, appeared to be the opposite of haunted. It was in a modern, planned suburban neighborhood, had vinyl siding, was brand-new, and had a nicely landscaped lot. But it was also haunted. Brand-new, filled with sunshine, and haunted.

At first, the activity was of the sort that can be explained away. The TV would turn on and off, light bulbs burned out rather rapidly. The first time we saw the activity as intelligent involved the TV:

Mom and I were watching a movie—a scary movie, if I remember correctly. The TV was turning off at the most irritating times. Plot suspense would build, and then click. After the third time or so—and I don’t know why I did this—I said out loud, “Stop that! We’re trying to watch this movie!” The TV immediately clicked back on, and remained on throughout the rest of the movie.

The next time this happened, I repeated myself. This time, the TV came back on…but with a flourish. I had been cross-stitching, and so had my scissors in front of me on the coffee table. When the TV turned itself (?) back on, my scissors opened, then spun repeatedly on their mid-axis, as if someone were playing with them, spinning for a couple of minutes.

Then the scratching and tapping on the wall began—my bedroom wall, to be exact.

Again, my first assumption was that this could be explained. The other side of my bedroom’s wall was the wall to the crawlspace above the garage. Nothing there…but perhaps a wild critter or two? That had to be it.

But the tappings and scratchings also showed themselves to be intelligent. The tappings sounded like the tapping of fingertips. The tappings and scratchings would begin in the morning, around and just over my bed’s headboard, as if something had decided it was time for me to get up. They would become more insistent and annoying until I rose from bed, and then they’d stop. Not once, not a couple of times, but dozens and dozens of times. Tapping on the wall became my alarm clock.

Then doors began to open and close, but only upstairs. Let me emphasize: this was not occurring as if a door was not latched properly, or not hung properly on its frame. I would approach a closed door, it would open, and then it would close behind me. This did not occur on a frequent basis, not daily as did the scratchings, but it occurred often enough to definitely get my attention.

Despite all this, as a family, we still weren’t certain that our house was haunted, not until we heard the voices.

First, the sounds of footsteps:

This always occurred upstairs, when everyone was downstairs or elsewhere—only when the upstairs was vacant. Then we’d hear the distinct sound of someone walking with a moderately heavy tread from room to room upstairs.

Once, whatever-it-was imitated our dog. Baron, would awake with the dog sillies, and you’d hear him thud off my parents’ bed, and then go running from room to room. The sound pattern of thud-thundering-dog-paws couldn’t be confused for anything else but Baron, being a goof after his nap. I was reading on the downstairs couch, and heard the sounds of Baron, jumping off their bed and galloping up and down the hallway. One problem: Baron was curled up next to my legs, asleep. He alerted to the sounds of his own play, and responded by slinking out of the living room, and hiding in the laundry room.

And, then, finally, the voices:

I was spoken to, as was my dad. I don’t believe Mom ever was. Dad’s experience was always the same, and right out of a horror movie. He’d go out to the garage, start to reenter the house, and hear a voice tell him to “Get out”. If I remember correctly, that happened three times or so.

I was only spoken to once. I was in my twenties, and had gone over to the empty house during the day to grab some stuff—books, clothes—to take back to my apartment. As I moved from room to room upstairs, my arms full, the doors would open for me, shutting behind me, as if someone were helping me to gather my things. I felt the presence; the house did not feel like I was alone.

My only explanation for my actions is that I had been experiencing phenomena for ten years or more in this house; I was accustomed to it. So, as I sat down on the top step, upstairs, to tie my show so that I could leave, I said aloud, “I’m sorry, but I’ve got to go now.” As I finished speaking, I stood. From behind me and above me, as if someone very tall were standing right behind me, I heard an petulant male voice say, “Well, just go then!”

I admit that I flew down the stairs, leaving my books and clothes on the upper landing. I didn’t return for them until Mom and Dad were home from work that night.

There were only three times that I was frightened in that house. That was one. The second was when our dog, Gretchen, screamed.

She was in the front room, facing the stairs, and we were all in the living room, with no view of the stairs or the downstairs landing. Gretchen shrieked like a human, and we all fell over ourselves and each other to get to her as she continued to scream.

She was looking up the stairwell, her eyes wide and bugging out, shaking and shrieking. When we reached her, she stopped screaming, but continued to shake and look up the stairs with that look of horror on her face. It took some time to calm her, and none of us saw what she did.

The third was only a few years ago. 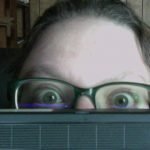