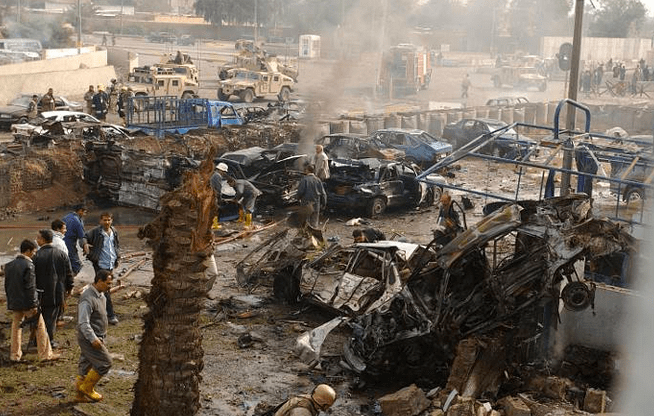 I already am so pissed.
–Gareth

The Fog of War: documentary about Robert S. McNamara, former US Secretary of Defense

April 9, 2003: Firdos Square, the toppling of the statue of Saddam Hussein

The Office of Special Plan, The Pentagon, Douglas Feith: aka, the US government’s version of Double Secret Probation

and, with that auspicious beginning, let’s complete the Kappa Chaos roster roll call, shall we?

The Man Who Pushed America to War: The Extraordinary Life, Adventures, and Obsessions of Ahmad Chalabi

Bernie Kerik, Minister of the Interior of Iraq and so much more

Occupying Iraq: A History of the Coalition Provisional Authority

Imperial Life in The Emerald City: Inside Iraq’s Green Zone

The four armed contractors, Scott Helvenston, Jerry Zovko, Wesley Batalona, and Mike Teague, were killed and dragged from their vehicles. Their bodies were beaten and burned, with their charred corpses then dragged through the city streets before being hung over a bridge crossing the Euphrates River…

The ambush led to the First Battle of Fallujah, a U.S.-led operation to retake control of the city. However, the battle was halted mid-way for political reasons…Seven months later, in November 2004, a second attempt at capturing the city, the Second Battle of Fallujah, proved successful…

No True Glory: A Frontline Account of the Battle for Fallujah

Iraq is being run by a frat at this point.

It’s funny (Kappa Chaos) because it is true (Skull and Bones). Really:

George W. Bush (1968), grandson of Prescott Bush; son of George H. W. Bush; 46th Governor of Texas; 43rd President of the United States. His nickname was “Temporary” since he failed to choose a name.

Indecisive, even in his frat/secret society, when he could have any nickname he wanted. Good grief.

Read my awesome friend Alexandra Robbins’ meticulously researched book Secrets of the Tomb: Skull and Bones, the Ivy League, and the Hidden Paths of Power

To leave you something mildly whimsical and Dollopical after all this madness, I leave you with this: Condoleezza Rice is a member of the board of directors of Dropbox. Yes, that Dropbox.

And then, of course, there’s the Coney Island Hot Dog Eating Contest. ‘Murica.

And one more splendid quote, to leave this clusterfuck on a high note:

The looters went after the building like the Rube went after a fire truck.