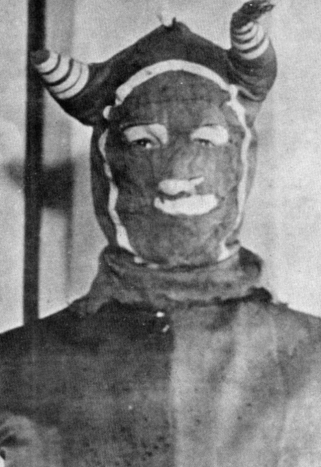 It’s always very surprising to me how I have no idea about any of this shit.
–Gareth

You want to mess about on the train trestle. Now, you know you ain’t supposed to do that, but it’s a lovely spring day in Missouri, you’ve cut school, you have a little purloined hooch, fuck it. Why not get a little sloshed with a couple of friends, get a good buzz, and drunkenly try to balance on railroad ties?

You take a couple of hits of the moonshine as you guys head on your merry way to hang on in private and while away the day, you get there, and you are met with this visage.

Ten to one, you either ain’t never drinking again, or you become a raging drunk.

Either way, your life will never be the same, all because your neighbors decided to start a vigilante club, and just had to add creepy masks to the mix, because CREEPY MASKS.

Lyrics to Johnny Cash’s “Sam Hall”, written by Tex Ritter, on Johnny Cash Sings the Ballads of the True West:

This is one of those delicious entries where my research made the episode Dollopier and Dollopier. Case in point: there’s a movie, a hotel, and a roller coaster. Roller coaster. Hang on for details.

2843 W 76 Country Blvd (I hope they specifically paid the city for that address, God love ’em)

They have a clean comedy room, and Lee Ann Rimes is going to be there at the end of April. Get some.

Faces Like Devils: The Bald Knobber Vigilantes in the Ozarks * Matthew J. Hernando

Missouri during the Civil War

Was I the only one that thought Hobos, Gypsies, and Squatters would make an excellent Cher Utlimate Greatest Hits album? No? Carry on.

That wonderful Ozark dialect? This is what I wrote in my notes: “Boomhauer=mountain speak”. Who is Boomhauer? Bless you young hearts. Behold:

Nailed it. Boy she pops!

You messed with the butt area of the horse-thing!

Oh, hey, you know who else got warning messages as stick bundles? Josh, in The Blair Witch Project. How did that work out?

And, yes, it gives me pleasure to note that this whole clusterfuck eventually led to the development of the 20th century Homeowners Association, another creepy tyranny, without creepy masks. I don’t think they use masks. I live up in the mountains, without an HA to tell me how to maintain my yard or what color to paint my house, thank God.

I saved the best for last, Rubes. I present Bald Knobbers, the roller coaster:

Fire In The Hole is themed around a story of Marmaros, an Ozarks’ hill town. Marmaros was the mining town that once existed near the present day sight of the theme park Silver Dollar City. The town of Marmaros was built for the miners of near by Marvel Cave with the intentions of being a tourist village such as Eureka Springs, Arkansas and Monte Ne, Arkansas. Investments were made and the town grew to a population of twenty eight. Marmaros’ existence relied heavily upon the mining operation of Marvel Cave. The town began to die out after mining ceased. Much of the town was later destroyed by fire, what was left moved to a new location south of the cave.

Marmaros was rumored to be burnt to the ground by a group of vigilantes known as the Baldknobbers. Obscure facts are now legend and some believe the burning of the village started out as a drunken fight in a local tavern. Others blame the Baldknobbers and their xenophobic outrage over Canadian, William H. Lynch’s purchase of Marvel Cave.

Riders pass scenes of the town’s residents trying to extinguish the flames before crossing a collapsing bridge, nearly getting run-over by a steam train, and wrecking into a dynamite storage shack. In the ride’s finale the coaster trains are sent hurtling over a drop into a pool of water with a splash down finish. The splash can be enhanced during the summer months to drench riders.

Fire In The Hole’s dated production values and odd subject matter have made the ride a cult favorite, with some people even developing “callback lines” to shout at various points during the ride.

Shouted lines, just like Rocky Horror. I want to go to there. Please.

So gleefully happy right now. This is why I cultivate this website, y’all, for gems like this. I am sated. For now.