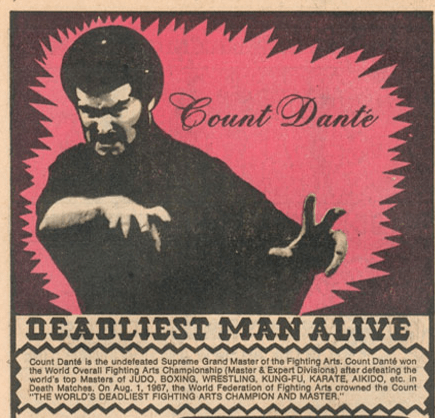 How long until this dude is fighting a polar bear?
–Gareth

A song, as it often happened, played in my head during this episode, to my pleasure. Welcome to my 1970’s and 1980’s colored world, and have fun!

Most obnoxious segue ever:

Adding the motto because it caught my eye–this Searching for Sunday Episcopalian didn’t remember a specific NT verse about studying (as opposed to learning and wisdom)–and because I cannot resist a rabbit hole because it is all connected, man:

Study to show thyself approved unto God, a workman that needeth not to be ashamed, rightly dividing the word of truth. 2 Timothy 2:15

The infamous Dance of Death, recorded by Ashida Kim:

This Book Could Save Your Life!!! “Kata Dan’te, the Dance of the Deadly Hands Long Form, is without doubt, the most savage and terrifying selfdefense form known to man. It is composed of fortyfive of the deadliest poison hand techniques ever devised, each one of which is guaranteed to kill, cripple or maim any attacker. Learning just one of these fists could save your life. Learning all of them will make you a master martial artist.” This is the Black Dragon Fist taught to John Keehan by Senzo Tanaka and then to Grandmaster Lawrence Day and Frank Dux. Like the Tibetan Burning Palm, this is a secret training form reserved only for select students.

Dim Mak LLC — on the Internet, everything’s a thing. Add that to my inappropriate cross-stitch pattern file.

Oh, and for those of you who either were not alive, or were not into this type of entertainment, here’s what Count Dante thought he was, and was not: Bruce Lee.

blog about documentary apparently in process (last post at end of 2014): Searching for Count Dante

Let us end with one more rendition of “Kung Fu Fighting”, from the 1990’s, from Wayne’s World 2–Wayne must fight his girlfriend’s father for her honor:

Recognize Cassandra Wong’s father? Yes, he is That Guy From That Thing. My recommendation: Big Trouble in Little China. Cult classic gold.