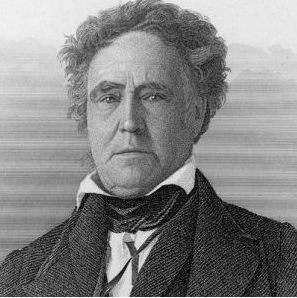 Richard Johnson and his Choctaw Academy of Whitening, illustrated by Gareth:

(damn it white people) These are salad forks.

(Native Americans) The moon has darkened on the situation we live in.

Johnson didn’t just muck about with the Choctaw Nation; Tecumseh was the leader of the Shawnee Nation. In for a penny, in for a pound.

A Sorrow in Our Heart: The Life of Tecumseh

A Spirited Resistance: The North American Indian Struggle for Unity, 1745-1815 (The Johns Hopkins University Studies in Historical and Political Science)

Tecumseh’s War, which comes from…

Tecumseh’s Confederacy (Wikipedia) was a group of Native Americans in the Old Northwest that began to form in the early 19th century around the teaching of Tenskwatawa (The Prophet).[1] The confederation grew over several years and came to include several thousand warriors. Shawnee leader Tecumseh, the brother of The Prophet, developed into the leader of the group as early as 1808. Deemed a threat to the United States, a preemptive strike against the confederation was launched resulting in the 1811 Battle of Tippecanoe. Under Tecumseh’s leadership, the confederation went to war with the United States during Tecumseh’s War and the War of 1812.

Take that, white people. Quit touching stuff that’s not yours and trying to make everything whitewashed.

the regular death in office of Presidents of the United States elected or re-elected in years evenly divisible by twenty, from William Henry Harrison (elected in 1840) through John F. Kennedy (1960). Ronald Reagan, elected in 1980, was wounded by gunshot but survived; George W. Bush(2000) survived an attempt on his life unharmed.

Oh. Yeah. Here’s the list. That’s what you get. Johnson really was a horrific vice president. He killed presidents he never met, and weren’t even born yet. Carla’s bringing the weird stuff again. That’s what I do:

I guess electing an actor was so strange that it broke the curse? oooWEEEEoooo

Oh, yeah, and let us review what Johnson did to his wives: what did sold down the river actually mean? Yeah, it was that horrific of him. Dude, if you had the balls to take a slave for a wife, and insist that fine society accept her at events (SALAD FORKS), you had the balls to divorce her. A simple divorce, you vindictive bastard.

“The Business of Indian Education” brings us back to salad forks!” Sigh.

I was discussing this episode with Larry, and Gareth’s salad forks riff reminded me of a specific scene in Little Women. Meg, the eldest sister, is attending a rich girl’s party, the type where you eat, de-corset, rest, re-dress in a different expensive dress, mingle and show off some more…it’s just a full day of being rich and fabulous. Meg is a sweet, wonderful person, but poor as dirt. All the girls are changing post-nap, assisted by the help, and talk turns to one’s new silk dress, a dear purchase at any time, but especially during the Civil War. Meg hears the conversation, and speaks up about how shoddily the Chinese silk worm farmers were treated.

(Louisa May Alcott‘s Transcendentalist hanger-on father, Bronson, was hyper-aware of social ills. Note he would have been overly worried about Chinese workers during the Civil War. Slavery? Bronson? Over here?)

The room full of ribbons, ruffles, lace, and hoop skirts comes to a sudden hush. The host turns to Meg with a smile that could cut like a knife, and says that she is so glad that Meg is present, to remind them all that “the poor are always with us.”

But come on, are we being testy? How bad was Richard Mentor Johnson? Not just us; Time Magazine included him on their list of worst vice presidents ever. Esteemed company: Aaron Burr, Richard Nixon, and Dan Quayle. Full list:

Two of them became president. One of them was president when I was born, which may explain some of my strangeness.

Oh, and how kooky was he? Two more examples, both from Time magazine:

Evidently van Buren’s experience with Johnson soured him on vice presidents altogether — when he ran for re-election he dropped Johnson from his ticket and didn’t bother replacing him. Instead, he ran alone.

Johnson, America was just not that in to you.

And, remember the hollow earth debacle? That was this fucking guy:

While in office, he proposed an expedition to the North Pole so Americans could drill to the center of the Earth, believing the planet was hollow (his resolution was defeated).

Before we go, I shall let Schoolhouse Rock, a gem of my childhood Saturday mornings, explain the convoluted, unnecessary, unfair electoral college to you.