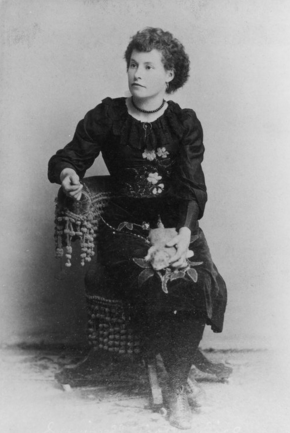 just knew a penis had been inside her, even though he couldn’t see it.
–Dave

So you think daddy issues were complicated in the Purity Balls episode? Did your dad shoot your fiancé because of complicated Freudian issues related to your hymen? Did your dad reject you because you were ruined by your own kidnapping, in which you were the victim? Yeah. It’s like that.

The Comanche: Horsemen of the Plains

Thanks to stargazermercantile, not only do we have that splendiferous image of Alice (I want that dress and those stockings and those rocking boots), but we have the delightful information that her pet prairie dogs had collars and leashes because of course they did.

Yes, her answer for occupation on the Sweetwater, Texas census really was “one who diddles and squirms in the dark“.

Okay, bring on the dames! Just click to enlarge (nudge nudge wink wink). Just behind the spoiler cut, so you can keep your job. You’re welcome.

Let’s highlight the last one, because 1) it’s gorgeous, and 2) it’s Mrs. Wyatt Earp: