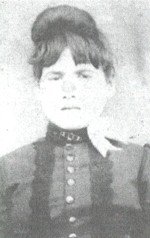 One source (plus Dave) says Zona was in her early 20’s. Ferrum College, in Ferrum, Virginia, says she was fifteen. Wellllll, that just makes the whole timeline that much more oogie, doesn’t it?

Let’s break it down:

The Man Who Wanted Seven Wives: The Greenbrier Ghost and the Famous Murder Mystery of 1897

The tragedy of Zona’s murder (and her spinning ghost head) has been brought to the stage twice.

My fellow Americans, I remember when I was in high school, and the musical version of Les Miserables was announced on the news. I was weirded out and full of immature righteous anger. A classic novel about famine, loss, death, war, fear…set to snazzy, catchy tunes? Offensive, weird, creepy, tasteless. I was a teenager, and, as all teenagers, I knew it all. Now, I need no good reason to start belting out “Do You Hear the People Sing?” I get it.
But… I can’t compute.
I try to think seriously about how this story might translate to musical expression, and my Dollop brain goes right to numbers like “Momma, Do You See the Spin of My Head?” (or, of course, “Momma, He Makes My Head Spin”) and “Meat, Meat, (Beat! Beat!)”…and “Young Anderson’s Lament”, “Seven Brides for One Greedy Brother”…

The more I look at that picture of Zona, the more I think it might be a post-mortem photograph. The dull look on her face, her half-closed eyes…plus, she is wearing what her husband placed on her: a high-neck tied with a scarf/ribbon…It’s not out of the question for that era, y’all, for this to be a memento mori image.

{"cookieName":"wBounce","isAggressive":false,"isSitewide":true,"hesitation":"","openAnimation":false,"exitAnimation":false,"timer":"","sensitivity":"","cookieExpire":"","cookieDomain":"","autoFire":"","isAnalyticsEnabled":false}
wpDiscuz
1
0
Would love your thoughts, please comment.x
()
x
| Reply
We use cookies in order to give you the best possible experience on our website. By continuing to use this site, you agree to our use of cookies.
Accept