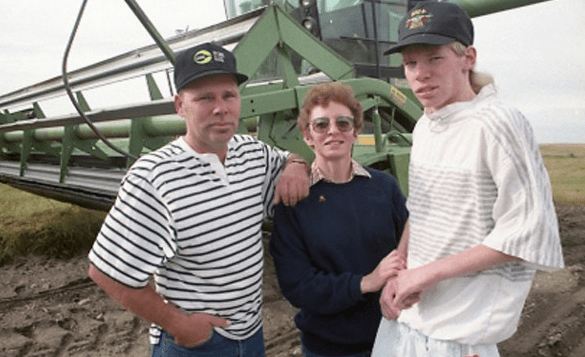 And, for people who don’t know, the auger is something I know nothing about.

OED.  Armageddon.  Etymology:  See Rev. xvi. 16 (A.V.)  The place of the last decisive battle at the Day of Judgement; hence used allusively for any ‘final’ conflict on a great scale.

…which leads us to Stephen King‘s The Mangler. Choose your flavor of sentient mangling machine, short story, or Robert England horror movie.

So, yeah, I’d say this episode’s title was well-chosen. I’d also say that Stephen King might have been right all along about electronic and mechanical devices…(let me refer you to “Word Processor of the Gods“, “UR“, “Trucks“…)

Oh, and here’s what a power takeoff looks like, for those of you who didn’t grow up in rural areas like I did. Oh, yes, and an auger:

Welcome, mechanophobia, we have saved you a seat at the table.

Now that I’ve frightened you, I owe you a laugh. This is a comedy podcast, and a comedy website, after all. For shame, Carla. Final conflict on a great scale, do you say?

Now, remember, I am disabled, and use assistive devices, so please don’t come at me sideways for joking about them. I totally feel for his using Velcro instead of zippers. My goto in that regard is replacing shoelaces, turning laced shoes into slip-ons with these awesome creatures. I highly recommend them; they got me through several rounds of physical rehab, and are still in excellent shape.

But, I am a teenager of the 1980’s, and, as you very well know, my strange mind is always zipping (see what I did there) around, making connections connections connections, so, for you young’uns, let me introduce you to ZZTop, who actually have a song entitled “Velcro Fly”. Take it, boys:

not famous to famous to not famous: very damaging. Just look at how many child stars from my era that are not alive now. I recommend the Cracked article 7 Reasons Child Stars Go Crazy (An Insider’s Perspective) by Mara Wilson (Matilda, Mrs, Doubtfire). Then, if you still have doubts, look up Dana Plato’s story.

And about that horrific judging the disabled thing. It’s just alive and festering. Right now, on Real Housewives of Beverly Hills (What?), Yolanda Hadid (Foster) is being bullied by her friends (“friends”) because of an invisible illness. That’s the umbrella name for diseases like mine–fibromyalgia and Ehlers-Dalos Syndrome. We don’t “look sick”. So these “friends” judge her every movement, passing her Instagram around, giggling about what makeup she used to look ill in that picture, gossiping about how she can’t be sick because see there’s a picture of her at the beach forever and ever blah blah bitch. And John Thompson was cocky because of the way he walked.

I am sick every moment, 24-7. That’s what chronic means. Intractable pain means I am always hurting. Now? Yes. How about when you went to see Greg Behrendt? The whole time. Now still? Yes. I don’t mention it because a) that won’t help and b) I’m being considerate of others. I can smile and infrequently do fun stuff and act like the rest of us not because I am faking it but because I am channeling my ancestor Boadicea and I am a CELTIC BADASS. Remember how you acted last time you had a migraine or a cramped muscle? Pussy. 😉

Now, I don’t care what people think as a rule, but just know these attitudes have ramifications. These social attitudes are the reason I am currently appealing my disability application, because this idea of “looking sick” 24-7 is out there. So…Look at the positive. Geez.

So, in that vein, here’s some more incredibly brave attitude from John Thompson:

his autobiography: Home in One Piece, with Paula Crain Grosinger

I looked for both my arms…it was pretty red where they had been.

And one more thing. Remember how he dialed the phone to get help? I know a lot of you weren’t alive or were quite young in 1992. So feast your eyes on this, and imagine:

John Wayne Thompson, if you are reading this, you are a badass.

And another history/family story from me (others under tags: Rita Pettigrew (mom), Cornelius Porter (great-grandfather)), relating to disability, both personal and financial:
Grandpa Greene, my maternal grandfather, had to appeal his disability application twice. He was a Korean War veteran, and diabetes was ravaging his body so that he could no longer walk. But nope, he could work. Finally, he had to argue his case before a North Carolina judge. At this point, he was losing part of one foot, and was going to have it amputated as soon as he received his damn disability money. The judge looked at Grandpa Greene in his wheelchair and told him that he didn’t see why Grandpa couldn’t work. Grandpa lifted the diseased foot up onto the table, and removed his slipper and sock. The judge blanched, and said nothing else except a shaky “Application approved.”

*Yes, I am a descendant of Boadicea’s. That is a story for another day.