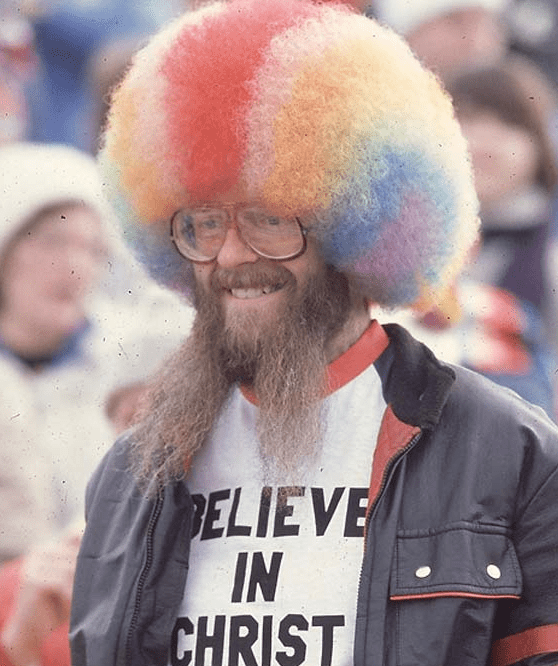 The fear of clowns is coulrophobia. Why do a lot of Americans have coulrophobia? John Wayne Gacy, Pennywise

, and the Rainbow Man. That’s why. You’re welcome. That’s what I’m here for.
I remember Rainbow Man, aka Rock ‘n’ Rollen. Stop. Just savor that for a minute. Let the flavor roll around your frontal lobe. Rock ‘n’Rollen. Yeeeeah.
He was just a part of watching sports with my dad. I took him for granted–Rainbow Man, not Dad–which I think speaks to how comfortable I am with the strange and unusual. Sports had spectators, commentators, and that guy with the sign and the fright wig.

–the documentary!
Rainbow Man’s place in the Kooks Museum
He was married four times. One of his wives, Margaret, accused him of abuse. During the 1986 World Series, she said that Rainbow Man tried to choke her out because she was standing in the wrong place with her John 3:16 sign.
‘Murica?
Cultural references from this episode (both creepy, because, holy shit, a kidnapping, Rapture-inducing clown just goes there):

Rainbow Man was depicted on The Simpsons, on SNL by Christopher Walken, and even drawn into Peanuts. All before his hotel-maid-hostage situation, I think. I hope. I’m not going to look it up because I want to hold up to the threads of hope in humanity I still grasp. (One of you little bastards will rush to crush me in the comments, I know it, that’s your karma, wooooosa. Momma Carla still loves you. Damn it.)
Band names from this episode: