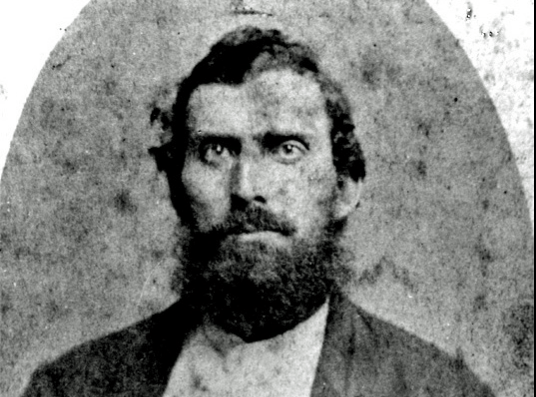 That’s a classic saying. Shoot a guy whose hands are full of baby.
–Dave

In case you might be related: Newton Knight on Ancestry.com

Knight was considered a Southern Unionist. Qu’est-ce que c’est? Let us look it up…come with me to the Kingdom of Wikipedia…

In the United States, Southern Unionists were white people living in the Confederate States of America, opposed to secession, and against the Civil War. These people are also referred to as Southern Loyalists, Union Loyalists and Lincoln Loyalists…Tennessee, North Carolina and Virginia (which West Virginia still formed part of) were home to the largest populations of loyalists, thousands of whom volunteered for Union military service.

Okay, that makes sense. Nice, reasoned explanation, with no subconscious feelings that the history teabags have been steeping in lo these 150 years–

The term was originally a derogatory epithet but is used by many historians as a useful shorthand…The word scalawag, originally referring to low-grade farm animals…

I feel more comfortable now, as someone raised in rural southern North Carolina. I don’t know how to be around a neutral, academic Civil War and Reconstruction discussion, outside of college. If minor slurs like carpetbagger and scalawag, never mind the big guns, aren’t thrown around occasionally, I get squirmy. Don’t get me wrong; they aren’t coming from me, and I deplore them, but they’re sadly like home. They are the crazy uncle at the Thanksgiving table–that first holiday without him, it feels too calm without his ranting and all the drama.

Here’s a practical, Dollop-related example. I was shocked to discover, when I researched the lyrics, that “John Brown’s Body” was a song written in his honor. My tiny rural elementary school did one thing really well: we had music classes every year. That means I I have six years of training on the autoharp, y’all. Bluegrass, bitches. Anyhoo. When we learned to sing the “Battle Hymn of the Republic”, it was hinted in that quieter adult voice that is reserved for cancer prison etc. that some people found “John Brown’s Body” offensive and it was best not to sing those lyrics to the tune in order to not bother anyone.

That’s how deep this shit goes.

That was probably more that you needed to know. This is awkward.

novel about the Free State of Jones and the Reconstruction Knight clan: Tap Roots * James Street

The State of Jones * Sally Jenkins and John Stauffer

Legend of the Free State of Jones * Rudy H. Leverett