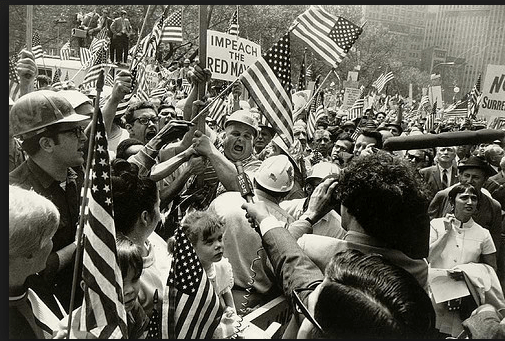 That Peter Boyle movie, Joe, was also Susan Sarandon’s first movie, and it is the source for slang that I learned when I went to grad school in Massachusetts; working class people referring to themselves (usually with affection or benign resignation) as “Joe Six-Pack” and their jobs as “Joe jobs”. I don’t know if that slang is American, or just New England’s.

Here’s the blurb from Amazon:

Joe Curran (Boyle) is a loudmouthed factory worker with a bigot’s mean streak. Bill Compton (Dennis Patrick) is a wealthy executive who, in an uncharacteristic fit of rage, has just murdered the drug-addicted boyfriend of his daughter (Sarandon). When the two men meet in a bar, an unholy alliance is formed. And after Bill’s daughter runs away, they search for her in the psychedelic underworld they despise, setting in motion a shocking and humiliating string of events that leads to a brutal and chilling final scene.

Good gracious. I think the copywriter was the one doing the happy hippie drugs. “Dig this, man…’unholy alliance’…”

Okay, things are going to get a little tight, here. Momma’s just warning you. So I am going to give you one more Joe funny. Listed as “frequently bought together with Joe” on Amazon? Bolero and The Happy Hooker Trilogy. I love this country. My peeps, keeping it weird.

Hang on with me. This is important–and interesting–and I end with a funny. I promise.

I have riffed on Kent State before, and I’mma gonna do it again. It’s the key that unlocked a particular Pandora’s box for America.
Much like watching Citizen Kane or Gone with the Wind now, the movie viewer might be (might be, I said insert Momma Carla side eye) excused for not seeing the big deal, because the viewer’s seen it all a million times. Context is crucial: Citizen Kane, Gone with the Wind, The Wizard of Oz…no one was using those filmmaking techniques, those movies were first. That stuff you take for granted, they pioneered. Context makes all the difference.

Same with Kent State. We, unfortunately, are becoming accustomed to news of authorities shooting civilians. Not jaded, that’s not what I mean, but time doesn’t stop when you hear the news of civilians shot by protective authority.

It did that day. Time stopped. People couldn’t work, couldn’t think, couldn’t breathe. Because it was the first. It just didn’t happen.
Our country vehemently disagreed about the war in Vietnam, the culture war was intense–

the Man versus the dirty hippies, and yeah, part of that culture war involved distrust and joshing of “the pigs”. But resistance was passive on the hippies’ part, and police response was arrest. Rinse, repeat.

Until time stopped, and the police killed kids.

May 4, 1970: The Ohio State National Guard opened fire on a student protest, wounding nine and killing four. I found an incredible archiving site dedicated to this watershed event, actively maintained by Kent State University radio: kentstate1970.org. Audio, news reels, video, and testimony. People can even add their own stories.

If you weren’t aware of this event, you do owe it to yourself to poke around this site, to see why kids and young adults so distrusted adults, why they would look to the SLA or Charles Manson

instead of society’s structures of family and college and occupation. See how terrified and angry they were, for good reason.

From It really is all connected:…

my strange who-are-the-good-guys day ended with this quote, from Detective Rust Cohle:

Of course I’m dangerous. I’m police. I can do terrible things with impunity.

The horrible, beautiful balance of civilization teeters right there on that one fragile word: can. Potentiality without intentionality. Razor’s-edge balance…

So here’s the timeline, to show how we got from the Kent State Massacre to the Hard Hat Riot:

A jury finds the Chicago Seven defendants not guilty of conspiring to incite a riot: the violence at the 1968 Democratic National Convention. Five are found guilty on the lesser charge of crossing state lines to incite a riot.

My Lai Massacre: The United States Army charges 14 officers with suppressing information related to the violence.

U.S. invades Cambodia to to further fight the Viet Cong. Large protests ignite all over the United States.

Demonstrations against the trial of the New Haven Nine: over 12,000 protestors. Actions in Cambodia intensify on Nixon’s orders, further intensifying demonstrations all over the US.

Kent State:
The Ohio National Guard were a presence on campus due to the four million strong student strike across the nation that was closing universities. This was wigging Nixon out; he figured that the remaining universities were going to go up in flames, or some such bullshit. So send in the guards.

On campus that day, a small number of youth were protesting America’s deals with Cambodia with regard to Vietnam; the remainder of the kids on the Kent State pathways and green were either walking to class or just hanging out.

28 Guardsmen admitted to firing upon the kids. The guardsmen that did fire shot 61 rounds over a period of 13 seconds. They murdered 4 students and wounded 9 others, 1 of whom was permanently paralyzed:

wounded, with distance from shooters:

Read that famous photograph’s caption again. Mary Ann was 14. 14 is what?…7th grade? In 7th grade I was wearing Love’s Baby Soft, playing MASH (mansion-apartment-shack-house, who are you going to marry & where are you going to live ) in my notebook, and griping about riding the schoolbus. She was watching someone get murdered by the authorities right in front of her.

What that caption doesn’t say is that John Filo was a photography student, and won the Pulitzer Prize.

Hard Hat Riot: Unionized construction workers attack about 1,000 students and others protesting the Kent State shootings near the intersection of Wall Street and Broad Street and at New York City Hall.

Ironically, that same day, when the union and the mayor most certainly did not let things be, The Beatles release their 12th and final album, Let It Be.

What if you knew her and
Found her dead on the ground?
How can you run when you know?

Genesis’ song “The Knife” explores Kent State from the point of view of the National Guard shooters.

Jello Biafra references Kent State in his song “Wish I Was in El Salvador“; included in the collaboration with D. O. A., Last Scream of the Missing Neighbors:

‘Til the TV cameras leave

Then we’ll fire away, make my day

The Stand * Stephen King (with the Superflu as the catalyst)

The Year That Trembled: book by Scott Lax; movie

We need to end on an amusing thought. Mr. Meany and those books Gareth mentioned?

They are real, and they are by Roger Hargreaves.

And you won’t believe what the very first book of the Mr. Men series was called.