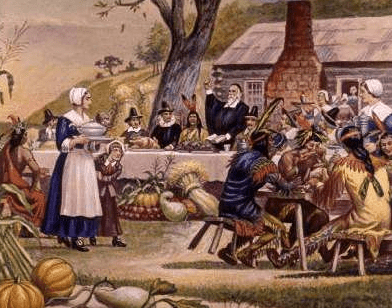 The Europeans were filthy creatures.

Easing into this one with clothing: the Puritans set themselves apart with, among other things, refusal to wear certain items of clothing, such as wedding rings and surplices. Historic Jamestown has compiled an instructional video about Elizabethan and Jacobean modes of dress at this time from a lecture given at the settlement.

Rat catcher’s yellows: t is often transmitted by animal urine or by water or soil containing animal urine coming into contact with breaks in the skin, eyes, mouth, or nose.

Nothing like sharing close quarters on a ship with a bunch of rats, eh? The Mayflower doesn’t seem so romantic anymore, does it, all starched white collars and shiny shoe buckles?

Samoset, Massasoit, and Squanto, aka Tisquantum

More than likely Tisquantum was not the name he was given at birth. In that part of the Northeast, tisquantum referred to rage, especially ‘the world-suffusing spiritual power’ at the heart of coastal Indians’ religious beliefs. When Tisquantum approached the Pilgrims and identified himself by that sobriquet, it was as if he had stuck out his hand and said, “Hello, I’m the Wrath of God”. (Smithsonian)

I love this quote. I love the idea that he was warning them. I actually laughed in awe of him, and ruefully because, in school, I was never taught how elegant and cunning and intelligent the First Nations peoples are.

You just came into our home. We could be cool, or we could rock your world and fuck you pasty, rickets-eaten strangers up. Choose carefully.

And what did we do? We immediately turned his warning sobriquet into a nickname, and then we dragged him back to England on a supply ship to show him off. Lookee what we found, human merch! Isn’t he fascinating? Damn it, white people.

Mayflower (1620) passenger list — my favorite name is Humility Cooper, with Remember Allerton as a close runner-up

The group of vagrants lumped onto the Mayflower and the Speedwell, called the Strangers, were England’s first attempt to use new lands as a dumping ground for people they didn’t want, but not the last, as seen in Episode 75: Arthur Philip and New South Wales.

the Mystic massacre: May 26, 1637, during the Pequot massacre–They set fire to a fortified Pequot village, killed whomever tried to escape the fire and smoke, and therefore killed hundreds of seniors, adults, and children.

When Rivers Ran Red: Governor Kleft’s Holocaust: that title doesn’t even do this sadist justice

Roots of American Racism: Essays on the Colonial Experience

Anyone want some more turkey? Anyone?

I shall distract you from the carnage and genocide with some good old-fashioned smart-ass know-it-all-ness. The first American Thanksgiving was actually in Jamestown, Virginia in 1610. 490 settlers starved over an incredibly difficult winter, and only 60 people met the ship bearing food. They gave a thanksgiving prayer service and celebration meal. Boom. First Thanksgiving.

See, now you’re thinking about how I need to get over my intellect and not about heads being. . .used. . .as soccer. . .balls. . .nope, impossible. I’m sorry. Turkey leg?