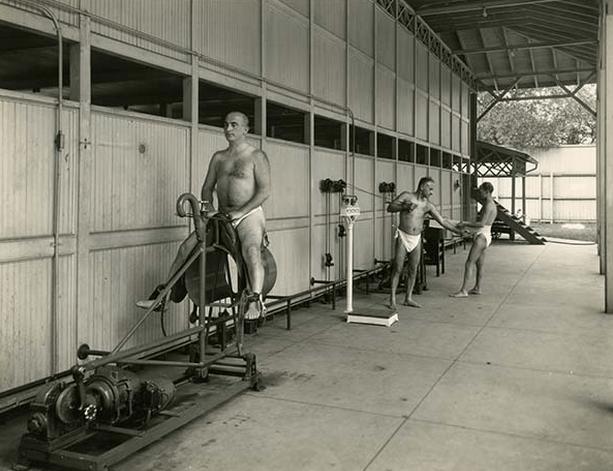 God’s Strange Work: William Miller and the End of the World (Library of Religious Biography)

* David L. Rowe
The Works of Ellen G. White: Steps to Christ, The Acts of the Apostles, The Desire of Ages, The Great Controversy Between Christ and Satan, The Story of … (5 Books With Active Table of Contents)

the Shakers
the Quakers
Dr. J. H. Kellogg Biologic Living Museum–I want to go to there! *happy bounce*
Click through for the image of the innocent little girl in pinafore riding the Kellogg mechanical horse. What a gift.
Dr. Kellogg’s 15 Most Absurd Medical Contraptions at Gizmodo
The Road to Wellville

and, what you have been all waiting for…Superfudge (Fudge series Book 3) * Judy Blume

But, guess what? I have to get serious again. Sorry. *slowly removes Superfudge from your grasping hands* I’ll read to you later, I promise.


It got uglier on the West Coast. Much uglier. Kellogg had nothing on Dr. Linda Hazzard. Seriously.
At least 40 patients died under her care, taking her fasting and enema cure.
Died. We’re not talking shit chair; we’re talking death.
From the author Gregg Olsen’s website, starvationheights.com:

Some called her a brilliant and gifted healer; some were certain she was a fiend.

The preface of Linda Hazzard’s (I can’t call her Doctor, I apologize, I just can’t) book that drew her patients to Olalla: Fasting for the Cure of Disease.

At her death, Claire Williamson weighed less than 50 pounds, less than half her weight before the fasting cure. Still, the doctor insisted her patient’s weight had nothing to do with her demise.

Oh, no, lots of adult women weigh forty-something pounds and go on to lead full, fulfilling lives. As long as there are no strong winds, or medium-sized dogs to carry them off. Hell, a hearty cat could have given her a dangerous tumble.
Starvation Heights: A True Story of Murder and Malice in the Woods of the Pacific Northwest

* Gregg Olsen — one of the best true-crime books I have ever read, and I have read more than I will admit
Band names from this episode: