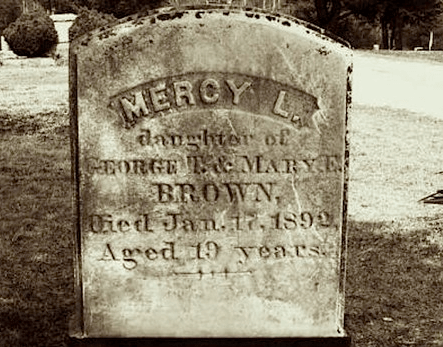 did not go to the woods because he wished to live deliberately, but because he wanted to get away from crazy people disinterring their relatives and eating their dead, infected-with-TB hearts.
September 26, 1859, he wrote:

The savage in man is never quite eradicated. I have just read of a family in Vermont–who, several of its members having died of consumption, just burned the lungs & heart & liver of the last deceased, in order to prevent any more from having it.

Run, Henry, it gets worse than just burning! Run!
See, tuberculosis, known as consumption, was thought to kill as the dead consumed their living family members’ life force. None of that silly science germy-germ stuff. No, a scapegoat we want, and a scapegoat we shall have!  So burning, inhaling, cutting…and consuming. Yes, Larry, you will be having your sister’s heart for dinner. Do you want to die like she did? No? Then open the tunnel for the choo-choo train…
1892: Mercy and her sister and mother were exhumed. Mercy was, shall we say, fresh, so she was deemed the culprit in her remaining brother, Edwin’s, consumption. Mercy’s heart was removed, burned, pulverized, mixed with water…and then (hold on to your hats) Edwin was forced to drink a sister heart smoothie.
Moment of silence for that awful moment in time.
I’ll never look at a Frappuccino the same way again.
(Spoiler alert: It didn’t work. Edwin died two months later.)
Mercy has been a great influence on the horror industry, no surprise:

by Christopher Rondina and Chuck Durang
Food for the Dead: On the Trail of New England’s Vampires

band names for this episode:

Previous: The Tank Chase      Next: The Dolphin