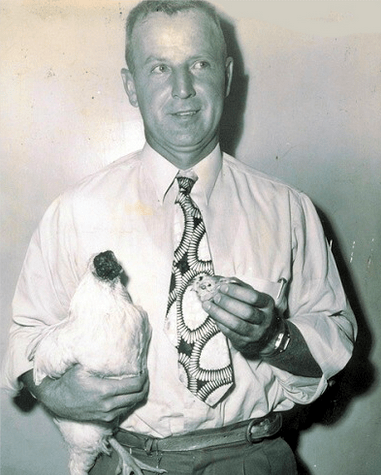 I am the Egg Man

The chicken was the first domesticated animal ever. It was valued for fortune-telling and fertility in ancient Greece and Egypt. In the 9th century, Pope Nicholas I declares that the cock was a religious symbol, and should be displayed at churches as a reminder of St. Peter’s denial of Christ. To this day, many churches still maintain weathervanes topped by cocks.

Cockfighting is believed to be the largest continuous sport on Earth, and was not illegal in Louisiana until 2008.
Mike even has a song written in his honor: Mike the Headless Chicken by Jane Gillies (feat. Mary Shapiro & Michael J. Ronstadt)
official site: miketheheadlesschicken.org

And, Gareth’s reference to Benny and Joon

–imagine this scene, but with chicken heads instead of dinner rolls. You’re welcome.

Band names for this episode: