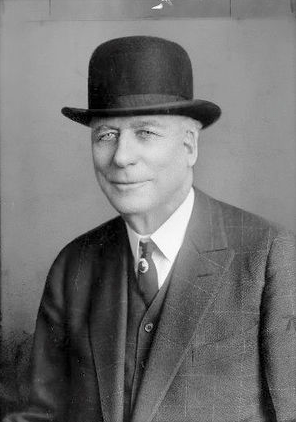 Note by your librarian: This entry starts with voter tampering/intimidation and prostitutes, and ends with the Red Summer of 1919, during which lynchings became a national sport. I am actually queasy as I am typing this, but I will not flinch. That means…there will be photographs. For only the second time, I will be placing said pictures behind a cut. Reason: these photos are too important not to share, and to preserve, as our history threatens daily to be whitewashed (grim pun intended); and these photos contain dead Americans, Americans killed because they were black. There is humor in this episode, and in this entry. Most of it is what our friend Christopher Titus calls the horror-laugh, but it is there. It’s okay to laugh while you’re learning, and it’s okay to laugh when you’re learning something awful. Laughter does heal, as long as it comes from a good place within you.

As our friend Gabriel Iglesias says, unity through laughter.

Tom Dennison (1858-1934): Pickhandle, Old Grey Wolf (I could throw a couple more nicknames in there myself, starting with variations on Psycho)

He stated throughout his life that he never hurt anybody, and never had any real political pull. Yep, and I don’t need to wear a bra. At all. These large things in front of me? Nope, not boobs. Have no idea what you are talking about.

While working as telegrapher for the White House, he was responsible for sending out Abraham Lincoln’s Emancipation Proclamation on January 1, 1863. O, sweet and bitter irony.

He was also responsible for transcribing and distributing Jefferson Davis’ “carry the sword and torch through the northern cities” speech.

Everything being connected sometimes gets a little spooky, doesn’t it? Spooky Mulder

We will be coming back to you, o yes we will (hello, Mr Hearst, hello, Mr Pulitzer, sit tight, you cute tycoons, you, you will have your turns on the merry-go-rounds, you rich fat bastards), but it bears defining here, because it lit the fire under the explosion that was this riot:

Here’s some relevant yellow journalism for you:

One more funny, and this one is juicy (pun intended): E. W. Ingram, the founder of the White Castle hamburger fast food restaurant chain, worked his first job ever under Rosewater. He was hired in 1900…as…

First he wrote about them, and then he sold them and ate ’em.

I am going to go ahead and insert the bands and cultural references here, instead of at the end of the entry as usual. Considering what will be at the end, doing otherwise feels disrespectful.

And, ending with one of each on a more solemn note, as we inevitably slide towards the read-more cut, and the photographs:

The oldest living Buffalo Soldier, Mark Matthews died in 2005 at the age of 111. He was buried, as was his right, in Arlington National Cemetery:

Matthews joined the legendary unit of black cavalry troops in 1910 at the age of 16. He soon found himself serving under Gen. John Joseph “Black Jack” Pershing in the Army’s pursuit of Pancho Villa…

The name Buffalo Soldiers was given to the troops of the all-black 9th and 10th Cavalry regiments by their adversaries in the Indian wars of the late 1800s. The name is believed to have originated either because the Indians thought the soldiers’ hair resembled a buffalo’s mane or that the Indians respected the soldiers for their courage and fearlessness, qualities they found in the buffalo. The soldiers wore the nickname with pride. And they earned their reputation. More than 20 Buffalo Soldiers went on to receive the Medal of Honor, the military’s highest award for valor. No other unit has won more. (source)

Imagine wearing that uniform with pride, helpless to do anything because you can’t leave ranks–and what could you do, anyway?–during the Red Summer of 1919? What a hopeless, hellacious feeling.

, then by Nina Simone

Southern trees bear strange fruit,
Blood on the leaves and blood at the root,
Black bodies swinging in the southern breeze,
Strange fruit hanging from the poplar trees.

Pastoral scene of the gallant south,
The bulging eyes and the twisted mouth,
Scent of magnolias, sweet and fresh,
Then the sudden smell of burning flesh.

Here is fruit for the crows to pluck,
For the rain to gather, for the wind to suck,
For the sun to rot, for the trees to drop,
Here is a strange and bitter crop.

Here is the extent of that harvest in 1919, thanks to kevincmurphy.com:

Okay, chickies. You trust Momma Carla, yes? Behind this read-more cut are pictures of the lynching and burning of Willy Brown, who was falsely accused of the rape of Agnes Loebeck. Plus other pictures of the Red Summer, because there is a current trend to erase–whitewash–our history in reaction to removing the Stars and Bars from federal property. I feel the pull to document document document in response. Next they will be wanting to remove racial slurs from Huckleberry Finn. Oh, wait.

SO, let me say this again. There are photos of dead Americans behind this cut, lynched, tortured and burned by other Americans because of their race, less than 100 years ago.

Read this sentence a couple of times, make certain you want to continue, get up from the chair and take a lap around the room, have a good stretch, then look. You can’t unsee this.