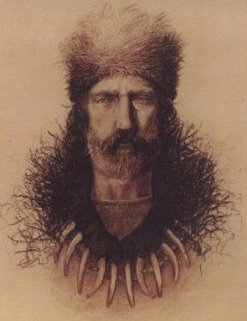 Hugh Glass went through more ordeals than most of us can ever imagine. Our bagel gets stuck in the toaster and burns, and our day is ruined. His back was removed by a bear and what did he do? Manned up and crawled halfway across the country to get where he needed to be gettin’, that’s what. He invented the word ordeal.

But one thing he did not do, is love a bear. There has been many an inappropriate animal and man relationship here on The Dollop, Lordy knows, but Hugh never knew a bear, and any bear tried to know him snatched back a nub.

That’s hasn’t stopped the rumor mill for poor Leonardo DiCaprio, who is playing Hugh Glass in the upcoming movie The Revenant. He is just trying to do his pre-movie press junket, and is having to field question after question about bear rape. Entertainment reporters, man.

Thanks to Justin Hamilton for his tweet, and Bull Xing for his message with link. I think we all needed this diversion into the absurd, don’t you? Just picture it:  a seasoned and respected actor, at a professional press/movie promotion event, being seriously asked sexual questions about the animals on-set. Rapey sexual questions. You thought you had a hard day at work. Perspective.

The ongoing news headlines about Leonardo DiCaprio stating he wasn’t raped by a bear in his latest movie are my favourites of the year.

The Guardian: Studio denies report Leonardo DiCaprio is raped by bear in The Revenant

It’s a mauling. Removal of Hugh Glass bits. Much different than rape.

Raped By Bear needs to be a band name.

One more little horror in The Guardian article: some asinine blogger suggested that The Revenant might give women the vapors. I am quoting:

Last week veteran film blogger Jeffrey Wells sparked outrage after suggesting the film would be unsuitable for female audiences due to its “unflinchingly brutal nature”.

Dude, If you could see my movie and book collection, you’d been the one clutching pearls. Guess what? I’m wearing pants, and I’m going to see The Revenant. Don’t worry about my pretty little head, find something else to do. I will decide–as an individual human, not as a nervous, hormonal woman–what entertainment is too brutal for me. Thanks but no thanks.

This is the 21st century, correct?