Leave a Comment
Mental illness lies to us about isolation

Mental illness lies to us about isolation

Hi, my name is Carla, I’m 46, I’m a podcaster, I have 2 dogs…and I have chronic primary and secondary depression and anxiety. What I mean by this is that I have them as stand-alone diagnoses, then have them compounded as both symptoms of, and then also natural consequences of, my chronic illnesses of EDS, fibro, and POTS. Triple whammy. I also have some PTSD issues even now from the assault I described and unpacked in episode 34, “This Girl Just Had a Bad Date”. Depression and anxiety (and PTSD) are liars, and one of the most insidious lies is that you are alone in this pain, and that you are alone in this—inability to cope? Inability to bootstrap yourself? Inability to YOLO? So I made a list in my #commonplacebook, which goes with me everywhere, of successful, “happy” people who do or have struggled with mental illness, often multiple disorders, like me. A couple of them, like @ladygaga, are also chronically ill like I am. Now, next time depression or anxiety tries to tell me I am all alone or desperate, I have receipts. I hope this list helps someone else, too. Add me to the list, and add yourself to the list. As Rumi said, we’re all just walking one another home. I will put a picture of the full list on theremightbecupcakes.com. #depression #anxiety #mentalhealth #strength #bujo #bulletjournal #neveralone #horrorpodcast #truecrimepodcast #bookpodcast #literaturepodcast @braintrustfm #chronicillnesspodcast #chronicpainpodcast #spooniepodcast #spooniepodcaster #zebrapodcaster #zebrapodcast #braintrustnetwork #cursiveismagic #chronicpain #chronicillness #PTSD #beyourownheroine 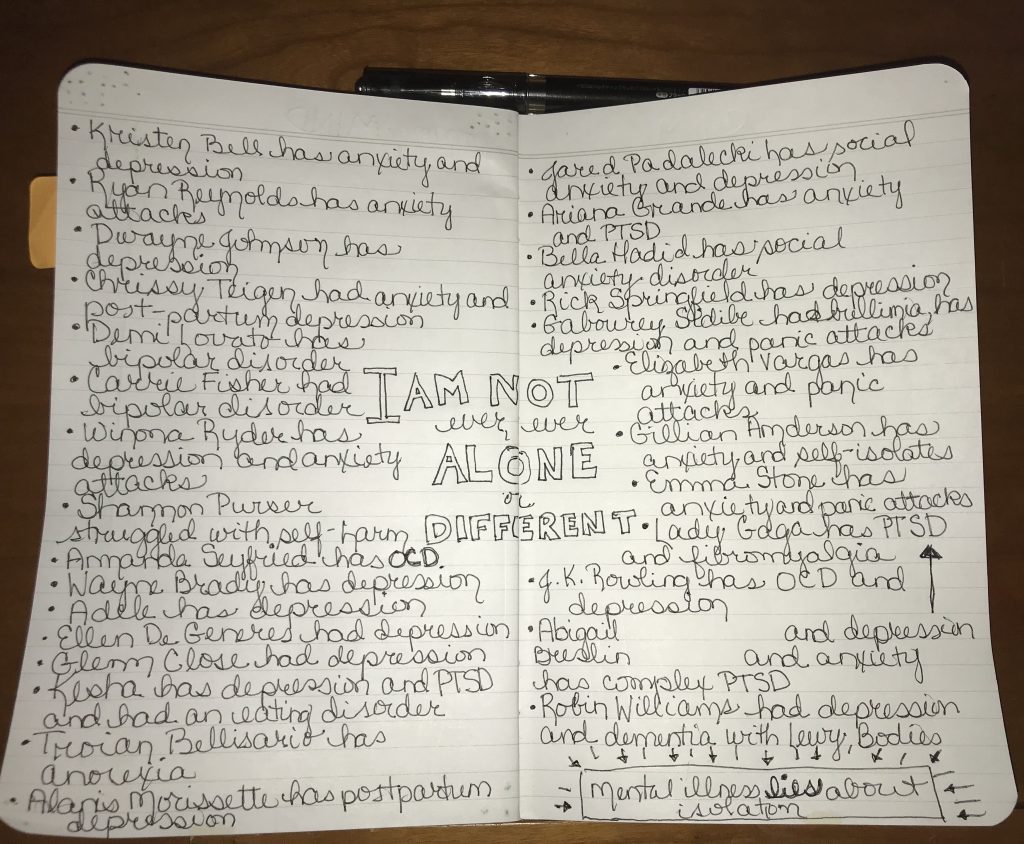 We are all just walking each other home.

Stitches: A Handbook on Meaning, Hope and Repair by Anne Lamott

my Goodreads chronic illness bookshelf (to be read and read)

Yahweh on the highway, baby.

The Move Organization is alive and well, and have their own website. Here is their treatise on their leader, John Africa; it is definitely worth a read, and is fraught with capital letters. Very excited, it is.

A whole bunch of videos collected from their site, from one minute to one hour long, as well.

PBS: Jason Osder’s documentary Let the Fire Burn
documentary trailer
post-screening talk with Ramona Africa, Jason Osder, and Officer James Berghaier, who continues to suffer from PTSD and grief from the Mother’s Day Move police action (I don’t know what to call it–“police action” sounds so white of me, I apologize, but I will leave it for the sake of honesty, to show how difficult it still is to discuss race relations and police and politician corruption and violence:

Oh, and that Ira Einhorn guy, that be-bopped in to John Africa’s co-op, claimed Earth Day, and be-bopped out again?

Yeah, thanks to my fascination with true crime, I know all about “The Unicorn”. He thought of himself as a mover and shaker in the counterculture, and tried to rub elbows with those that were, like Abbie Hoffman and Jerry Rubin. Then he just wasn’t there anymore, and neither was his sweet, pretty girlfriend, Holly Maddux. In 1979, Holly’s body was found in a steamer trunk in Einhorn’s abandoned apartment. Einhorn was chilling in the south of France. He was not tried until 2002, but finally received life without parole.

Just wait after November, you’ll have a front row seat because I’m going to make Attila the Hun look like a faggot.

Well, that’s all I need to know. Using vile bigoted slurs, and planning on raping and pillaging? That is a campaign slogan for the ages.

Wilson Goode, first African-American mayor of Philadelphia, (1984–1992) mayor during the Move police action and house bombing: he of the famous statement “let the fire burn”, he who destroyed an entire cul-de-dac of homes on Mother’s Day