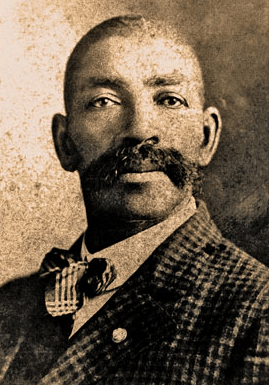 Gareth: I think he was just being cute.
Dave: No, it’s the Death Wink!

Black Cowboys of the Old West: True, Sensational, and Little-Known Stories from History

Let us pause and remember Marshal Reeves’ compadre, White Crow, aka Stagecoach Mary Fields: episode 135. And don’t let anyone ever tell you that there were no badass black people fighting for and settling the Wild West. Next time someone makes a smart remark about Morgan Freeman

, smite them with The Dollop. Verbally. We don’t condone actual violence–head injuries tend to ruin the good learnin’ a person just received.

See? There’s even a blackcowboys.com. Tell ’em I sent ya.

And then, of course, a shoutout to our other favorite tracker: The Revenant

The Art of Manliness Podcast: Best Lawman of the West

mental_floss: The Life and Times of U. S. Marshal Bass Reeves

There actually were turkey shoots where I come from–rural southern North Carolina. I just remember, on the last turn before church–which was out in the country–a sandwich-placard sign would show up every autumn announcing the local turkey shoot. I had no idea what that could be, and, to my uber-smart-kid thinking, I should already know this I should already know everything I can’t ask. So I didn’t ask. I instead envisioned turkeys thrown like clay pigeons–

Turkeys are two things: creatures of habit, and birds. So they flock, and they like to return to flick in the same damn spot, no matter what might be dangerous there. So a turkey shoot started as a method of hunting the wild feathered blockheads by the hunter deliberately disturbing a flock and scattering the birds–

and now we wait. The turkeys will return, transitioning from birds to easy targets to dinner.

Sometimes, in the rural US, a turkey shoot is a contest involving shooting at paper targets, using shotguns, and the prize is a frozen turkey.

Colonial-era turkey shoots involved ridiculous animal cruelty and absolutely no sport, and we shall leave it at that. Shame on you, Daniel Boone. For shame.

Buffalo Soldiers in the West

: A Black Soldiers Anthology, ed. by Bruce A. Glasrud and Michael N. Searles

Bright’s disease: kidney disease that involves edema, heart disease, and high blood pressure, and is basically something you do not want to have while out on a horse in Indian Territory

Speaking of which: Indian Territory, which is familiar to anyone like me who devoured Laura Ingalls Wilder’s memoirs

, at any one time contained what is now:

Oh! One last thing: There is back-and-forth about whether or not the Lone Ranger

is based upon Marshal Reeves. (my vote is yes)