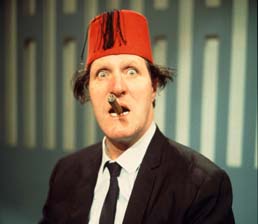 Gareth: He realizes he’s misplaced the pith hat.
Dave: Oh, fuck that! This doesn’t work without the pith!
Gareth: And he doesn’t want to walk up (on stage) with nothing–
Dave: What the pith!

Note: All pullquotes in this entry are, of course, Tommy Cooper quotes. Enjoy and/or enjoy cringing.

Tommy was actually a member of the Magic Circle, an esteemed British fraternal organization of magicians. Their motto: indocilis Privata Loqui (not apt to disclose secrets)

I sleep like a baby. I wake up screaming every morning around 3 a.m.

Funny Way to be a Hero

and Always Leave Them Laughing

, both by John Fisher

his song about his favorite expression:

The Laughtermakers: A Quest for Comedy

What do you call an unemployed jester? Nobody’s fool!

Check out Harry Anderson, he of Night Court

. He combines quite skillful magic with deliberate flubs. I’ve seen one awesome skit with his wife, Leslie, reenacting a Houdini rope escape. The setup is that he is the great magician and escape artist, the joke is that she is the skilled one. Sounds so simplistic, plays so well on stage.

https://youtu.be/62JwCO_tICI
Gambling has brought our family closer together. We’ve had to move to a smaller house. The description of how Cooper handled duties in the Royal Horse Guard–dodging them by pretending to always be attending to another duty–reminded me of a certain character, goofy yet unexpectedly clever, just like Cooper, who tried everything to dodge military duty: Klinger on the television show MASH.

: Being on this show was considered an honor in early television, even though the host was stiff in his delivery. My dad called him “the Corpse”. He is best known for introducing the subjects of worldwide hysteria, in their first American TV appearance, with this deadpan, stiffbacked wave to the curtain: “And now, The Beatles

Police arrested two kids yesterday, one was drinking battery acid, the other was eating fireworks. They charged one and let the other off.

the history of the pith helmet: I actually had a khaki-colored pith helmet as a toy as a child. I loved it. I remember wearing it not only while playing pretend games, but also while riding my Big Wheel or bouncing a ball against the back of our chimney. What a sight for the neighbors, that strange, bookish child riding a Big Wheel in circles with a crooked pith perched upon her head. I so wish I had video. I have no idea of the helmet’s source, beyond it being my dad’s. I will inquire.

the history and symbolism of the fez and tarboosh

some Spike Milligan, for your viewing pleasure:

And, yes, this is the video. The Video Where Tommy Died On Stage and The Audience Thought He Was Joking. Putting behind a spoiler cut so it doesn’t autoplay. No, I haven’t watched it. Nope, not judging if you do. Carry on.