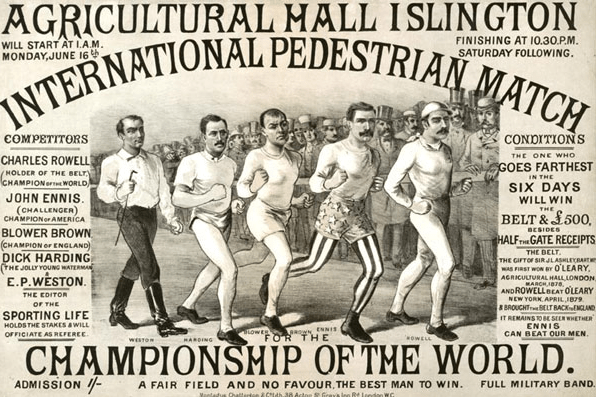 You got to learn to walk before you can walk!
–Gareth

I usually save the music videos for the end, but damn it, this one deserves to start the show, because we are lucky it sill exists! (Lost and missing early television show recordings deserve an episode.) Rubes, I give you Ms. Patsy Cline, dedicated to our crazed pedestrians: “Walkin’ After Midnight”, on the Bradley Studios TV Hour, 1957:

A Man in a Hurry: The Extraordinary Life and Times of Edward Payson Weston, the World’s Greatest Walker * Nick Harris, Helen Harris, and Paul Marshall

books by his mother, Maria, which he tried to sell door-to-door

The Last Great Walk: The True Story of a 1909 Walk from New York to San Francisco, and Why it Matters Today * Wayne Curtis

Weston and Pedestrian Era Walking Contest Rules at Walkapedia, which I had no idea was a thing

The Lost Art of Walking: The History, Science, and Literature of Pedestrianism * Geoff Nicholson:

Nicholson finds people who walk only at night, or naked, or in the shape of a cross or a circle, or for thousands of miles at a time, in costume, for causes, or for no reason whatsoever. He examines the history and traditions of walking and its role as inspiration to artists, musicians, and writers like Bob Dylan, Charles Dickens, and Buster Keaton.

One more note about Weston the Pedestrian:

Weston did not do well, but tried again in January, 1878, but failed again due to being bumrushed by fans. You read that right:

Stepping off from London in driving snow, he made it 75 miles to Folkestone the first day. Alas, hampered by another injury – he was knocked down by overenthusiastic fans in Wimborne Minster – Weston fell 22 miles short of his goal.

and, finally, that fine gentleman from Concord…

But, lest we forget, one other fine gentleman, tarred and feathered though he was, tried to wager that he, too, could walk long distances. Alas, his long walk came to naught but a ditch. All hail Oofty Goofty.

Culture references from this episode:

Postscript worthy of The Dollop: Searching for the cultural references links, the horror show below came up. Spice Girls masks. Thanks for the nightmares, Amazon.