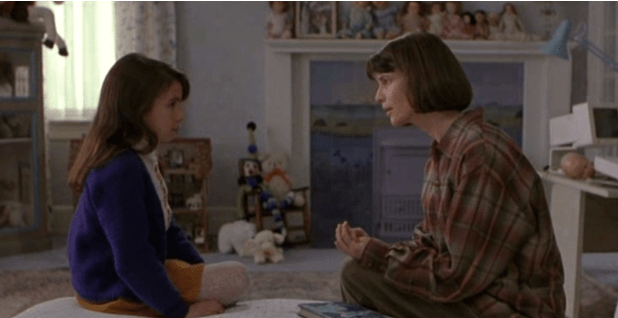 Omen IV: The Awakening (1991), originally (if my memory serves) a made-for-TV movie–if so, a very well done one

I have great affection for this movie, even though the characters seem unaware of the Second Coming of Christ at the end of Omen 3. Or maybe this is a do-over—fine, you won, but hahahahaha. I can rock with the latter, because Delia is so creepy, and they chose an actress who resembles the original Damien actor(s).
The reasons I love the movie:
The exploration of how Satan hates any religion with a positive bent, not just Christianity. The representation of New Thought/New Age/pagan beliefs and religions was refreshing, as well as the Jehovah Witnesses not being presented as a joke.
I nannied a child that looked and (no joke) behaved like Delia. With all my work as a therapist with severely disturbed children and adolescents (attachment disorders, oppositional defiant disorder, conduct disorder, kids well into their on their way to being sociopaths), my “Delia” was the only child I have ever met that I have feared. This movie is therapeutic and cathartic for me.
I also love the physical callbacks to the first movie. Some of them are subtle, like Damien’s look back at the camera at the end. Delia does it at the psychic fair.

The Omen (1976) — one of the best horror movies ever made, and with Gregory Peck, no less

Omen III: The Final Conflict (1981) — starring the great Sam Neill from In the Mouth of Madness and Event Horizon as Damien