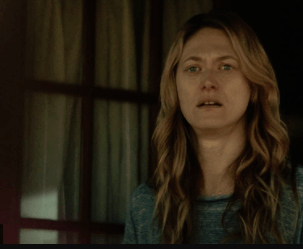 Here’s the original review from Letterboxd. Below it, I’m going to add where I expounded on it on Reddit when someone started a discussion about not quite understanding the characters’ lack of agency, and the bleakness of the ending. I don’t spoil the ending per se, but I do discuss the family’s dynamics, so you are forewarned.

This is an entire mood. I am now creeped out by my own familiar dark bedroom.

Some excellent acting here. For example, Marin Ireland’s character is talking to two farmers early on and turns away, twitching her fingers by her sides. I kinda laughed to myself thinking “Looks like someone wants a smoke.” I was just being a smarty writer in my head, always looking at details. Well, if her character didn’t turn out to be a smoker. 👀

I think the irrationality in Louise and Michael’s behaviors came from grief—fight? flight? appease? There was so much unresolved family drama there, and I think that’s exactly what the demon fed upon. Secrets, unspoken feelings, parental favorites, passive aggressive manipulations, the use of religion as a tool to make family members behave…

It was one of those hopeless horror movies, where there is no out. Something was set in motion a long time ago, through bad acts, through acts undone (the Book of Common Prayer has the penitent confess to acts done and undone), through microaggressions repeated over and over…who knows. But a “dark and wicked” drama played out involving the kind neighbor, the preacher, and the family over the years that allowed a demonic foothold, and illness and grief allowed the door to open.

I think, just like Louise and Michael, we aren’t completely certain exactly what really happened during this movie. The movie is an unreliable narrator. Is the ending a play by the demon? Or in Louise’s head?

I think the nurse’s commentary about love served to point out the ongoing problems over the years with these relationships that caused the “dark and wicked” chinks in the armor. She was the Greek chorus.

and a further reply, to someone talking about “the sinking feeling of abandonment” (spoilers):

Yes, their dynamics are perfect for what they did. Louise gets stuck/people pleases and Michael runs and doesn’t call/hides in his “new” family. That plays out perfectly in the horror, gets distorted and twisted–which is not only what horror does, but what evil does, I think…distorts our nature. It’s what it did to the people around them, made puppets of their real selves.